Sterling firms against euro ahead of UK lockdown extension 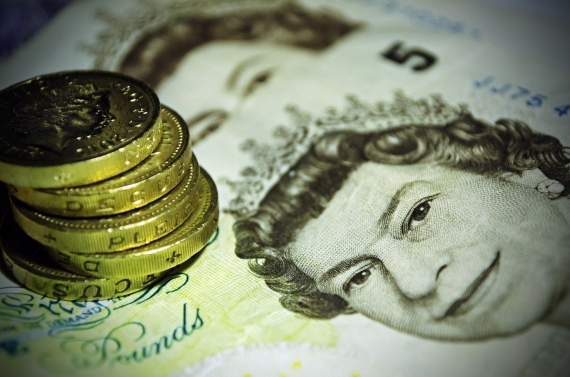 The pound steadied on Thursday, slipping slightly against the dollar but holding firm against the euro, ahead of an expected announcement about an extension of Britain's lockdown imposed to curb the spread of coronavirus.

The British government is expected to announce that it will extend the lockdown in the UK for a further three weeks at its daily coronavirus news conference around 1700 London time, after an emergency response committee meeting at 1530.

Michael Hewson, chief market analyst at CMC markets said the lockdown extension was already priced into the pound. Sterling is more driven by the dollar's strength and the euro's potential to weaken than by domestic factors, he said.

Hewson said he was "fairly bullish" on the pound against the euro, but less so versus the dollar.

"(I'm) still looking to buy dips in the short to medium-term simply on the basis that it's probably a better bet than the euro at the moment," he said, referring to the euro zone's problems in coordinating their response to the crisis.

"In terms of where the pound could go in the short to medium-term, it could probably drift back to around $1.225 over the course of the next few sessions but ultimately I don't expect it to weaken profoundly and if it does it'll only be as a result of a big rise in the value of the dollar," Hewson said.

As the coronavirus pandemic continues, worldwide cases have reached 2 million and lockdown measures have halted growth around the world.

Britain's economy could shrink by 13% this year due to the government's coronavirus shutdown, its deepest recession in three centuries, with public borrowing set to surge to a post-World War Two high, the country's budget forecasters said on Tuesday.

"The return to more risk-off trading has been triggered by two key drivers," said Lee Hardman, currency analyst at MUFG.

"Firstly, the price of oil has resumed its decline after details of the historic oil production agreement were finally revealed… Secondly, the latest economic releases yesterday confirmed that the COVID-19 shock has sent the U.S. economy into freefall," he said.